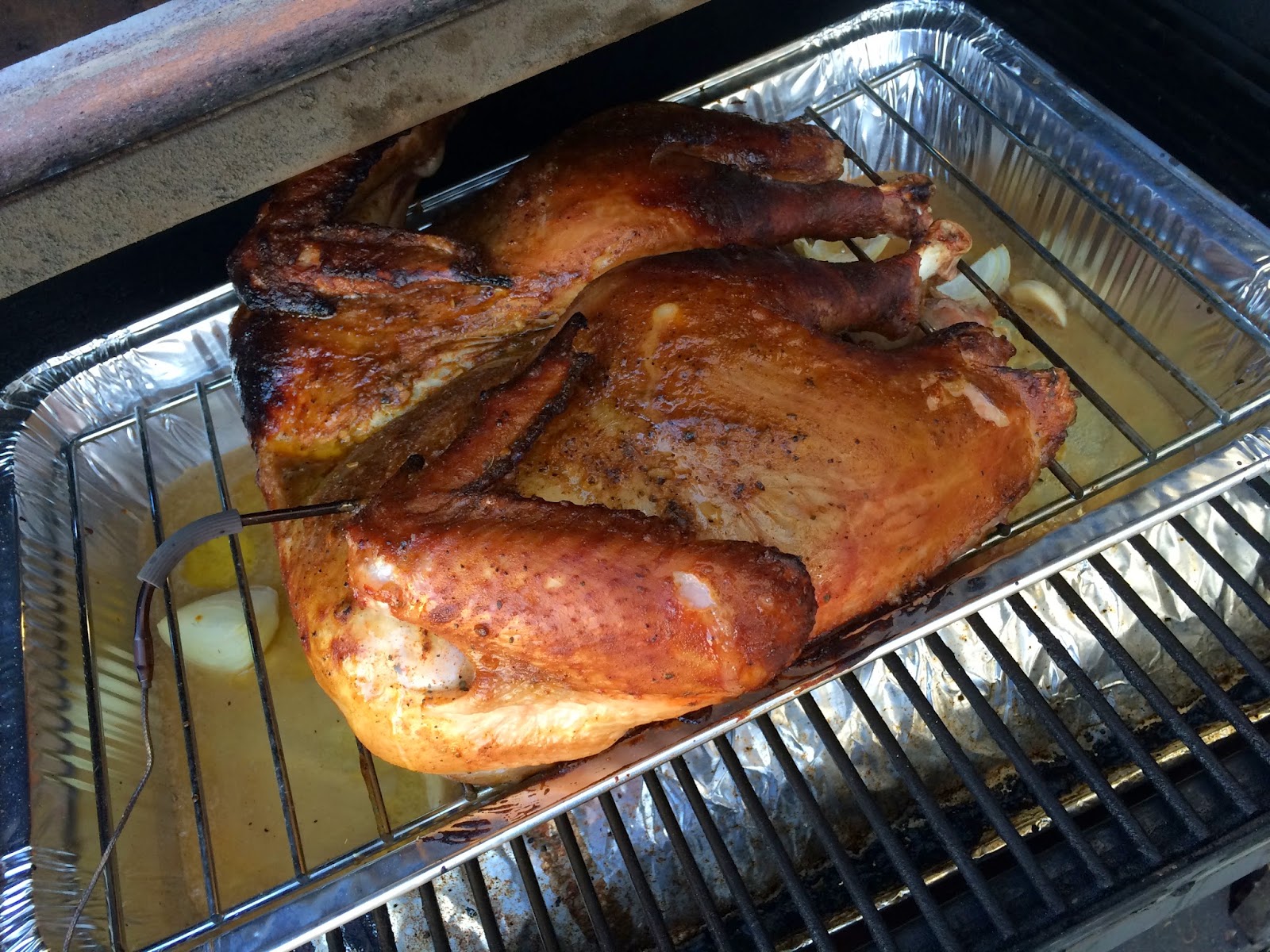 With Thanksgiving this Thursday I figured it would be a good idea to test a new recipe I want to try before hand. Turkeys are priced to sell this time of year so we usually get a few to have in the freezer for over the next few months. I used one of our smaller birds we purchased for my test cook. I'm glad I did.

I decided I was going to dry brine and spatchcock it. Cook it at 350º with chicken broth under it to add flavor and use for a stock later. butterflying the turkey helps it to cook more evenly and quicker.


First I spatchcocked the turkey. I took my knife and scored the bird along it's spine then stood it up where is neck would be and ran my knife down separating one side of ribs from the spine and repeated on the other side. This was much easier to do than I had anticipated. The first time I tried to spatchcock a turkey I cut through the rib bones which is very tough to do. Running the knife blade down the side of the spine cuts through the cartridge and connective tissue between the ribs and the spine making the cut much easier.

Once the spine was out I flipped the bird over and spread it apart so I could remove the keel (breast) bone. This is a bit harder to do on a turkey than a chicken as it is bigger. I used my knife to score either side of the muscle around the bone then took my fingers and slide them down between the meat and the bone. Once the meat was separated from the bone I cracked the collar bone so I could remove the keel bone and lay the turkey flat.
Now that the bird was laying flat I sprinkled it liberally with kosher salt, inside and out, and let it sit over night in the fridge.

The next day I pulled it out and patted it dry and then put rub on it. I should have rinsed the excess slat off the bird and then patted it dry - this is why you do a practice run.
I put the neck, back bone and tail into a foil pan with onions, garlic and chicken broth, put a grate on top of it and set the turkey on the grate. I also painted the turkey with a mustard sauce.
I had started my cooker earlier and it was up to temperature so I took the turkey out and set it on the smoker to cook. I stuck my iGrill mini probe (I love this device) in the breast and set my temperature to 165º. When the temperature is reached and alarm goes off on my phone so I know it's ready.

I let the bird cook and when my alarm sounded I took my Thermapen (love this one too) and double checked the temps. the breasts read 165º and the legs 180º. The turkey was done. I took it in and started to carve it only to find that the breast meat on the underside was not cooked yet. I was not happy. I finished the breasts off in the oven as I had already shut down my cooker. Again, this is why you test cook.

The only thing I can figure is the broth and the pan kept the underside from reaching the ideal cooking temperature. The overall flavor was good but the skin was too salty and the soup I made from the scraps came out very salty too.

For Thanksgiving day I plan to:

I'll change:
Hopefully the changes will make the bird I'm cooking for friends and family much better and not so salty. I'll be adding a leg of venison to the mix too. It should be fun
Posted by sgibbsdesign at 3:34 PM