Review: More BBQ and Grilling for the Big Green Egg & other Kamado-style cookers 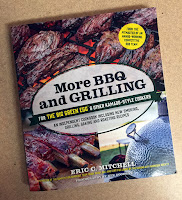 More BBQ and Grilling is written by Eric Mitchell an award winning pitmaster who has been cooking on the Big Green Egg since 2000. He and his wife started the team, Yabba Dabba Que!, and compete in competitions throughout the North East. They have competed in both the Jack Daniel
s World Championship Invitational and the American Royal where they earned a perfect score for their crème brûlée.

I don't own a Kamado-style cooker but the recipes are easily adapted to other cookers and grills. If you have a Big Green Egg or similar cooker this cook book is great. Eric gives you the information to set up your your cooker correctly to get the temperatures you want. The last chapter talks about care and set up of your kamado-style cooker from purchase to use. The recipes cover everything from appetizers to desserts.