I met Tommy Houston of Checkered Pig two years ago at the Grill'n & Chill'n BBQ Cook-Off in Waxhaw, NC. I saw him again this year, in Waxhaw, and asked if he would be willing to do an interview with me for my blog. He graciously said he would. Tommy is a busy guy. He owns a restaurant in Martinsville, VA, caters, and travels around to do BBQ competitions. With all that going on he agreed to do an interview.


Q4Fun: How did you get started doing BBQ?
CP: I volunteered to cook a whole hog for the volunteer fire dept. I was a member of in 1980, I had never cooked one before.  I felt like it was a total disaster but everyone loved it and needless to say I was hooked on cooking bbq.

Q4F: How did you come up with your name?
CP: I come from a racing background I've raced motorcycles, bicycles and road races( running). Also the fact that we were the official caterer for the Martinsville Speedway for five years so something with a racing theme seemed natural.

Q4F: What was your first competition and how did you fare?
CP: 2004 Tryon, NC I was vending there also we got a fourth place chicken and a first place Rib call.

Q4F: How many competitions a year do you compete in? What’s the furthest you've traveled for one?
CP: This year is going to be the most ever @ 30. Up until this year my son was racing dirt bikes so we couldn’t do as many normally about 10 – 12 per year. I’ve been as far as California, Nevada and Utah. 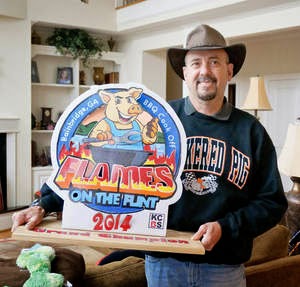 Q4F: What is you’re favorite style of competition? KCBS, MB, other? Why?
CP: KCBS because it’s all about the Meat.

Q4F: You were on this past season of Pitmasters, what was the experience like?
CP: Pitmasters was fun, I was very fortunate to not have to travel we filmed @ the Martinsville Speedway. I’m not real comfortable with not knowing what we have to cook. I’m not a chef so being just a boy who loves to cook bbq made me alittle  nervous as to what we may have to cook. Luckly it was pork baby back ribs and Turkey. We knocked the ribs out of the park but came up a little short on the turkey to finish 2nd.

Q4F: How has being on Pitmasters changed your team?
CP: Really hasn't changed us at all we have been on other BBQ shows so we are still just plain country folks. 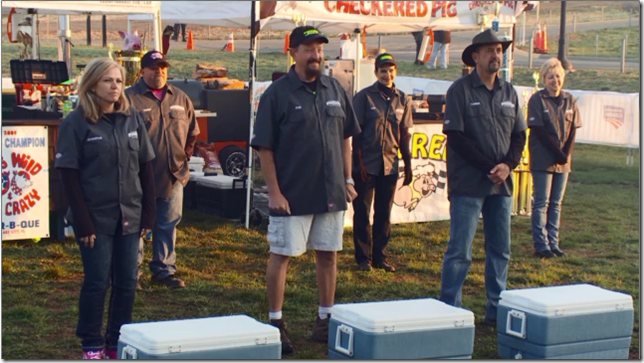 Q4F: Do you have any advice for those wanting to start competing in BBQ?
CP: Take a class, there are classes being taught by the best teams in the country  with that being said you can come right out of the shoot cooking first class Q.

Q4F: We're headed into fall, do you have any special BBQ things you like to cook around this time of year?
CP: Deep fried turkey and smoked beef tenderloin 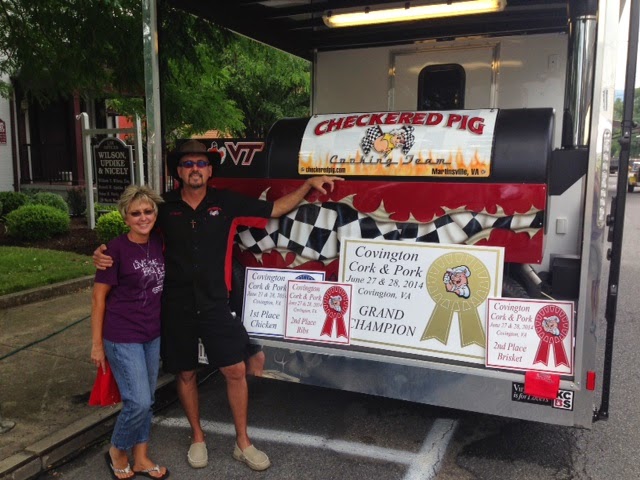 Q4F: What's the strangest thing you have cooked on your cooker?
CP: Ostrich meat

Q4F: Why did you cook ostrich? What was it like?
CP: Didn't much care for it  …it was pretty tough; could have been the cook, :-) … we were at ribfest and a gentleman had an ostrich farm and wanted us to try some.

Thanks again to Tommy for taking the time to chat and share a little about BBQ. Look for him and his rig at a competition. Stop and say hi, but not during turn in.
Posted by sgibbsdesign at 2:34 PM