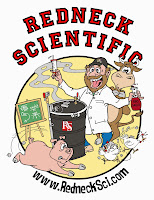 I had the pleasure of meeting the Head Pitmaster behind Redneck Scientific at the Q-City Charlotte BBQ Championship. I have followed Redneck Scientific on Twitter for a while and wanted to meet them in person. Jerry is a lot of fun to hang out with and talk to. He knows his way around a pit and pig and enjoys what he does. They make their own sauces and rubs that they use when they cook on their homemade UDSes (Ugly Drum Smokers) or as Jerry calls them Redneck Convection Ovens™.

Since 2011, Redneck Scientific has: 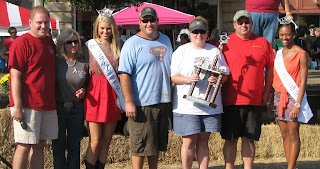 Below is a short interview and some tips for cooking that Christmas turkey.
Q4F: How did you get started doing BBQ?

Redneck Scientific: I grew up in Eastern N.C. We cooked hogs over oak coals at most big social events. I helped kill and clean the hogs, and I was the kid that helped build up the coal fire by burning logs in a spare barrel.

Later in life, after I earned the trust from the older generation, I was placed in charge of spreading coals under the hog throughout the night.

By this point, I had learned to read a pit temperature by touching my hand on it and how to tell when a pig was done by pulling on its legs.

Back then, we didn’t have temperature gauges and probes like we do now. All we had was what we had learned or what others had taught us. This came to help me later on in life when I decided to start competing in BBQ.

Q4F: How did you come up with the name Redneck Scientific?
RS: Honestly, it came about because of how our smokers work and the fact that I think every BBQ team name needs to leave an indelible imprint on whoever sees it. See, our smokers work using simple physics and the fact that we are cooking on what people have called “trashcans” seems to imply that there is a Redneck behind its creation. Hence the name, Redneck Scientific.

I love the fact that where ever we go, its seems as if there is/are one or more people wanting to see what these “Rednecks”  are up to and meet us. We’ve gotten used to being called “THE Rednecks” by other teams and I have started calling some of our support folks “ ’Necks ” in return.

Q4F: Why did you start making and selling UDSes?
RS: The idea to start using UDS or “Ugly Drum Smokers” started when I was smoking turkeys with an offset pit with my friend. I think both of us were tired of staying up that long to slow smoke turkey, and I just had to find another way.

I did a little internet research and found the UDS. Instead of doing due diligence, I jumped right in and built one myself based off a picture.

After a few trials and tribulations, I finally found the combination I thought was right for me, and I started building them for friends. Later, as I began to tell folks how they worked, I came up with the name “Redneck Convection Ovens™”.

It seemed to help folks grasp the overall concept, and I soon decided to trademark the name and start in with BBQ contests to market them.

Q4F: Why did you decide to market your rub?
RS: Friends kept asking for it, and I got tired of throwing some rub in a Ziploc bag and handing it out. Right now, even though it is available online at www.rednecksci.com, we tend to just sell it to friends and competitors.

Q4F: What was your first competition and how did you fare?
RS: Our first completion was the East Carolina BBQ Throwdown in Rocky Mount, N.C. in 2011. We placed 5th in Pork and 6th in Ribs while bombing in both Chicken and Brisket. Still, we came in 13th Overall. 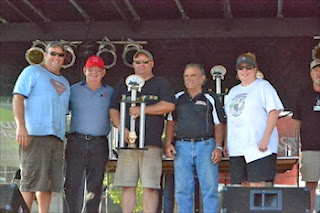 Q4F: Do you have any advice for those wanting to start competing in BBQ?
RS: Don’t believe everything you read. Start out doing a nearby backyard or local contest. Look for a BBQ team to mentor with. Next, try to find two or three people who share your same desire to compete and form a team.

Q4F: Can you give one piece of advice for those who want to cook BBQ?
RS: Do not fall into the false belief that your BBQ is the “best” ever. Most of the early praise you receive comes from friends and family members. “Free BBQ is Great BBQ” I always say. Only when you start to sell or compete, do you find out how good your product really is. And, I would like to add, that there is no one way to do BBQ. Keep your mind and palate open.

Q4F: Since we're coming up on Christmas what would your top five BBQ gifts be?

Q4F: Do you smoke anything special for Christmas or New Years?
RS: Turkeys. Lots and lots of turkey for my family and friends.

Q4F: Do you have any tips for people smoking turkeys?
RS: Keep it moist by stuffing the cavity with apples, rosemary and lemons. Use a cooking bag (Reynolds makes one that can be found in the aisle where plastic bags and foil are sold). DON’T eat the stuffing!!! Why? Because if you are shooting to pull your bird around 163F internal meat temperature (carry over cooking will take it past 165F…i.e. the safe to eat zone), the inner stuffing will not be in a safe range most likely.

Smoke your bird for 4 hours @225 degrees with some kind of fruit wood. After 4 hours, add 2 cups of chicken stock to the bag and seal it. Cook until you hit an internal temperature of 163F in the breast. Pull and allow to mellow out for an hour or so before serving. If you want to be even more brave, drain the juices out of the bag and make a gravy with them.

Also, do not use the pop up thing that meat processors put into the turkey breast as an indicator that it is ready. Throw the thing away and buy a $15 dollar oven safe digital thermometer with heat resistant thermocouple instead.

Q4F: What is the strangest thing you have ever cooked on a pit?
RS: Nothing is strange to us Rednecks. If it fits, we’ll smoke it.

We’ve done pretty much every kind of meat, vegetable, seafood and even salt combination you can think of. Maybe our strangest meat would be bear meat (which came out pretty darn good in my honest opinion). 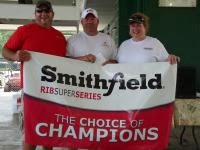 Thanks to Redneck Scientific for taking the time to chat and do an interview. Check them out online and at competitions. They're a lot fun to talk to and know a thing or two about cooking.
Posted by sgibbsdesign at 12:00 PM