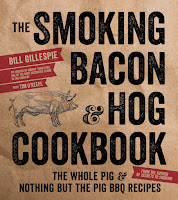 The Smoking Bacon & Hog Cookbook – The Whole Pig & Nothing but the Pig BBQ Recipes is written by championship pitmaster Bill Gillespie. He started cooking competitive BBQ in 2005 and won the Jack Daniels World Championship Invitational Barbecue in 2011 and in 2014 he won the American Royal Invitational, probably the two most coveted titles in the world of competitive BBQ. Bill knows what he’s talking about and shares his hog knowledge with us in this book.

Bill Gillespie covers everything in this book. From the rooter to the tooter (ok, not quite but pretty close). The recipes are easy to read and follow. He covers appetizers, snacks, drinks (with bacon in them) main courses, whole hog, and dessert (with bacon). The book is worth it just for the section on whole hog.


Read more »
Posted by sgibbsdesign at 10:27 AM No comments: