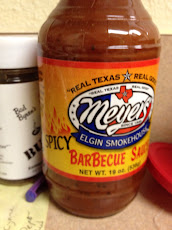 Meyer's Elgin Smokehouse makes a variety of rubs, sauces and other delectible delights that I have had the privalige of reviewing. I've had the Spicy BarBecue Sauce sitting on my shelf for awhile trying to find just the right thing to try it on.

Truth be told, I'm not a fan of sauces. BBQ meat must stand on its own and the sauce only enhances and brings out the flavor. In my book, if you need sauce the meat isn't seasoned right. Well, I did find something to use the spicy sauce on. In fact two something's; smoked wings and Pigs on the Wing.

The sauce is a nice red orange color hinting at the heat contained within. You can see flecks of spice floating in the sauce  and smell a sweet tangy scent. The sauce isn't runny but it isn't thick like ketchup either. It has a nice flow to it that allows it to come out of the bottle smoothly without trying to beat it out or it all coming out at once.
The initial taste is a nice sweet flavor that becomes a spicy heat. The spice isn't too hot so it makes, what I think, is a nice mild hot wing. One of my daughters disagrees and thinks it is too spicy. The sauce marries the sweet of a BBQ sauce with the spice of a mild hot sauce for a very nice flavor. With a dash of the Texas Hot Wing Sauce it kicks up the wings to another level.


This sauce would go good on ribs for a nice sweet and spicy rib, as well as a good dip for brisket after being thinned out a little with the brisket juice. I would even mix it into hamburgers just to give them a little something extra.

On the Gibbs Ribs Scale* I give this sauce a solid 3/4's ribs. I would buy it over many other sauces but there are a couple I like better. It is not a sauce that will over power the meat but it will enhance it.


*When I do reviews, books or otherwise, I rate the items with ribs (they are my favorite BBQ dish). A full rack is great and a single rib is poor. I will tend to stick to a full rack, half rack or one rib.
Posted by sgibbsdesign at 8:43 PM