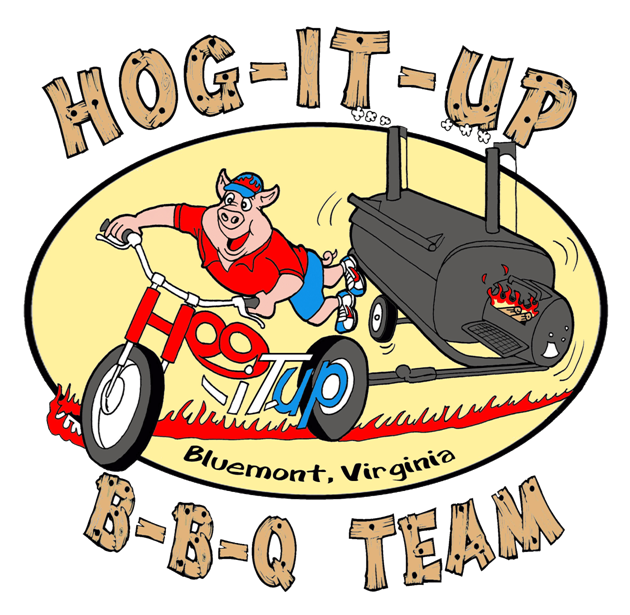 I've been following Hog-it-Up on twitter and they seem like a fun team, so I decided to interview them and they were happy to oblige. As a transplant from Texas to Virginia, Mike has brought Texas style BBQ to the East coast competitions. I'm sure we could argue the finer points of Carolina BBQ over Texas BBQ but I figure if it's smoked and it tastes good it's all good BBQ.

He met his wife, Michelle, in Australia and together they make some good BBQ. They also compete in chili cook-offs so they're a busy pair. With their dog Boomer and Mike's brother Kevin they make up Hog-It-Up BBQ Team.

Q4F: How did you get started doing BBQ?
Hog-it-Up: I’m originally from Texas, which is the only place you can find great BBQ! But when I came to Virginia I had a tough time finding any BBQ, let alone good BBQ, so I decided to really put my knowledge to the test. Friends and family kept asking me to cook for them, saying it was the best they’d ever had. I then heard about Pickin’ in the Panhandle and asked my brother Kevin if he wanted to come along and help me cook in the Backyard section, good brother bonding time you know! It wasn’t until the next year, when we went to enter again, that we found out that the Backyard section was going to cook on Sunday, well we didn’t want to cook on a Sunday because that’s the only day I get to sleep in, so that pushed us into the Professionals and the rest as they say is history!

Q4F: How did you come up with the name Hog-It-Up?
HIU: We both own Harley’s so that was the inspiration for our name and logo. Hogs, Harley’s (HOG’s) and smoke all go together for a great time!

Q4F: What was your first competition and how did you fare?
HIU: Our first competition was Pickin’ in the Panhandle in Hedgesville WV. Those were the days when we loaded everything into our trailer, often arriving early Saturday morning to start cooking. We were a hot and fast cook team in those days! Our brisket placed 2nd in the backyard competition, needless to say we were hooked after that!

Q4F: How many competitions a year do you compete in? What’s the furthest you've travelled for one?
HIU: We try and compete in as many as we can afford to do, but typically get to about 12 per season, as well as local chili competitions as our schedule will allow. The furthest we’ve gone, and most memorable competition to date, was the American Royal in 2012. We placed 5th in Chicken for the Invitational portion of the competition, and we’ve got the $4,000 ribbon to prove it to! (Q4F: Congratulations. That's quite an accomplishment.)


Q4F: I have lived in Texas (Longview) for about 3 years so I know Texans are particular about their chili too. So I have to ask, beans or no beans?
HIU: With beans of course!  For me Chili isn’t chili without beans! I’m a native TEXAN and had a lot of chili in TEXAS and elsewhere. We even make our own and have won contests with it and for us beans make TEXAS Chili but there are a few who argue that. Just so we had an understanding of the “other side” or what we would call the dark side, we accepted an invitation to attend and judge a CASI (Chili Appreciation Society International http://www.chili.org/ ) chili contest over the winter, and I have to say we were pleasantly surprised with the chili entrees we sampled.  Unfortunately they did lack that complexity of flavor and/or that mild creamy texture you get when incorporating beans into chili. Was it fun? Heck Yea!  It was a blast and everyone had a great time putting on the event with exotic drinks for all, best site contests, great camaraderie amongst all the teams and some really colorful costumes. BUT as for the chili itself I think I’ll stick to what we like, that being “CHILI WITH BEANS”. I might even have a go someday as a contestant because I’m convinced my chili will hold up to anyone’s chili with or without beans!

Q4F: What is your favorite style of competition? KCBS, MB, other? Why?
HIU: We compete in KCBS (Kansas City BBQ Society) at the moment, but plan to do a MIM (Memphis In May) competition at some point, shake things up a little and hang with the Hogs! KCBS is fun getting all 4 meats cooked in time. But what is even more fun is when a competition organizer has ancillary events for teams to enter, typically called “Anything Butt”, which is anything but BBQ! This lets teams creative juices flow with anything from seafood to meatloaf, and any dessert you could possibly think of!

Q4F: Do you have any advice for those wanting to start competing in BBQ?
HIU: Learn your pit, understand where it is hot verses cold, learn how to crank it up and shut it down. Fire control is the number one concern only second to timing, something that a Pit Master needs to perfect. Also, don’t skimp on buying good quality tools and products for the job you’re doing. Buy it once and buy it right. It takes time to build a good “kit” of everything you may need at any given time. Have a place for everything and everything in its place on competition day so that you aren’t searching for that vital piece of equipment at a crucial time. Maybe visit a competition and talk to the teams, they’re always happy to give some advice based on their experience. Use the internet! There’s a lot of great information out there.

Q4F: Can you give one piece of advice for those who want to cook BBQ?
HIU: If it’s a weekend thing look on line and get some good cook books, there’s plenty out there. Don’t be afraid to try something different on your BBQ. With a little care you can cook anything from seafood to a cake! But if competition BBQ? Be prepared to dedicate time to perfecting your Q, but most of all enjoy what you’re doing.

Q4F: Do you have any advice for cooking brisket? How do you ensure you get the best brisket possible, as this is one of the harder cuts of meat to cook well?

HIU: Brisket is easy once you get it figured out. You can get a good result with what is known as a “full packer” USDA Select, Choice or even better Certified Angus brisket from your local Walmart, or HEB or other retail store depending where you are. Or you can go “the whole hog” and purchase USDA Prime or even a Wagyu brisket, but be prepared for the sticker shock on those babies and availability is limited! When we are at home just BBQing for fun we simply throw some rub on, usually whatever is at hand, and throw it on the pit. Regardless of type of brisket you’ll need to wrap it at some point, keeping moisture in is key, so throwing a little stock, mop or BBQ sauce on the brisket when you wrap it will help add and hold in moisture. WHEN IS IT DONE!!!!??? The “done” point will vary from brisket to brisket and depending if you are a “hot and fast” cook or a “low and slow”. The meat temperature is going to vary, but remember you are looking for “the jiggle”. That will normally be between 195 and 215 somewhere. That elusive “When is it done temp?” is the hard part to cooking brisket. Be prepared to practice a few times. It’s a knack learned with time and patience but if you are diligent and pay attention to the small details it will pay off and you to will be the go to guy for awesome brisket! You’ll get the same comments and questions we get: “Your Brisket is amazing!! How do you cook your brisket so consistently?”  It’s not an easy question to answer.  PRACTICE!

Q4F: I see Michelle aka PitmasterMrs. is from Australia. Does Vegemite play into any of the recipes? I know in Australia they do a lot of grilling but do they have anything like American style BBQ?
HIU: Australia doesn’t do what we consider to be true BBQ. Aussies grill a lot and quite often will do something as quick and easy as a “sausage sizzle” which consists of a wide variety of flavored “snags” with grilled onions on a slice of bread, oh and don’t forget the “tomato sauce”. Sadly we are unable to confirm or deny if Vegemite (Q4F: to find out more about Vegemite click here) is our secret ingredient in our BBQ sauces. One thing said, you never know when it might appear in our BBQ, with that wonderful savory flavor.
Thanks again to Hog-it-Up BBQ Team for taking the time for the interview. If you see them at a competition stop by and say hi.

Posted by sgibbsdesign at 8:38 AM