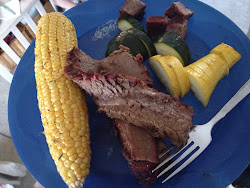 Brisket is Texas BBQ. It is a big hunk of beef from the chest of a cow. When people think of brisket they usually think of the flat. When I think of brisket I think of a packer. The packer is the flat and the point combined. It makes for some good eating. Im going to tell you how I cook brisket. It works for me and my family and others who have sampled it love it. It is my wife's favorite type of BBQ.

When done correctly the brisket has a nice smokey beef flavor that is awesome. It is also one of the types of BBQ that can go wrong easily. If it is under cooked it is tough and hard to eat. If it is overlooked it is dry and crumbly. Hitting the sweet spot takes some practice. 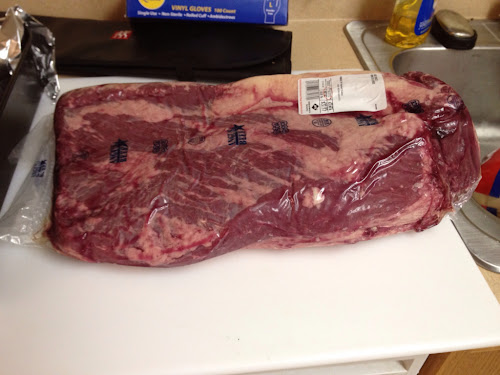 First off you will need to remove the brisket from the cry-o-vac pack. I do this at the sink and have the side I'm opening hang over the edge of the sink so the juices that are in the pack drain into the the sink. Less mess.

Once the brisket is out of the pack you are going to need a sharp knife to trim the fat off. There is a lot of fat on a brisket. Some is good for keeping the meat moist. The side that has the most fat (the fat cap) should be trimmed so there is 1/8 to 1/4 inch of fat layer. Don't worry if you go too deep in some areas. I usually try to remove all the yellowish grey looking areas so there is nice looking white fat sitting on top. 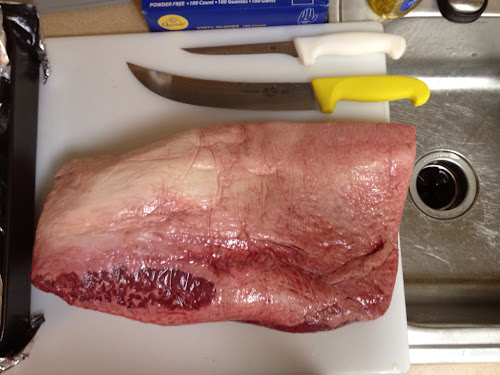 Trim the edges of the meat also removing all the grey looking meat and making the sides look nice. On the point side trim that fat down too. You don't want to remove it all just clean it up and take it down a little. Also remove the silver skin that is on this side. Be carefully not to carve out chunks of the meat though. 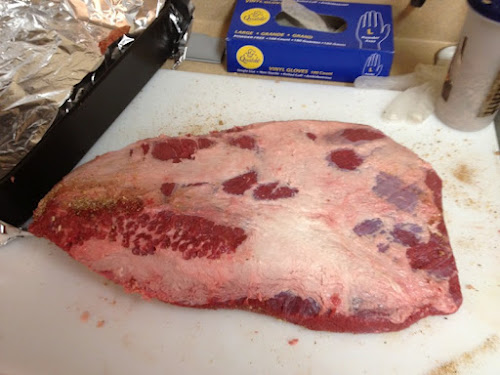 Now you will want to trim a corner off the brisket so you will know which way to slice it when it is done. If you look at your brisket you Can see the grain of the meat. That is all the muscle tissue and it goes on direction. You will want to cut a small corner off of the brisket going across the grain. Put some rub on this little piece and throw it on the fire. It is yummy. 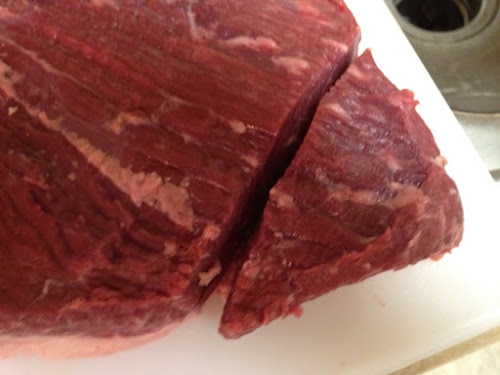 Once your meat is trimmed you are ready to rub it. Sprinkle the whole piece of meat liberally with rub. Pat the rub in so it sticks better. Make sure you coat the entire piece of beef. 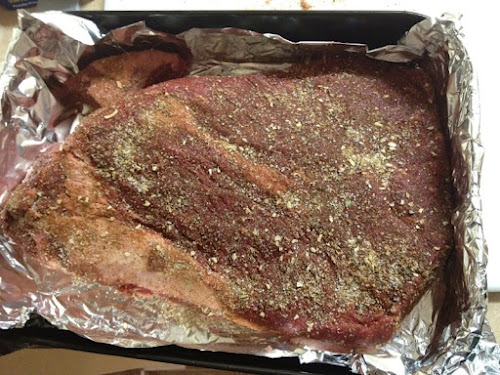 Once the rub is on let the meat rest for at least an hour. I usually leave it over night in the fridge so the rub can pull the juices up and the flavors can work their way in.

Start your fire. You are going to be cooking the brisket between 250°-275°. Many cook it lower but it takes much longer. Once you have your temperature dialed in put the brisket on the cooker and let it go. Every hour I check my cooker temperatures to make sure they are maintaining and I spray some mop on the brisket. The mop helps to build up a nice bark. This is optional but I really like the way it makes the brisket turn out.

A remote temperature probe is nice to have for cooking brisket as you can see the temperature of the meat rise with out having to open the cooker and probe it. I have a thermometer that I leave in the meat so I can see how it is cooking. 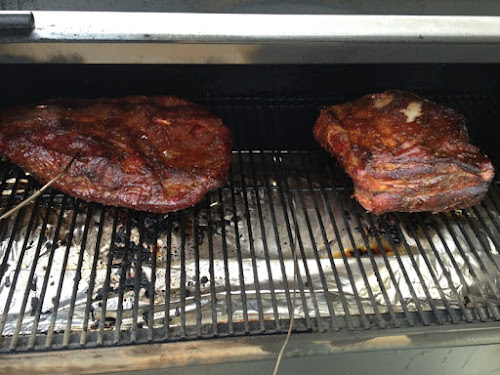 The cook's treat will be finished in two to three hours. Once it's done take it off the cooker, slice it up and enjoy. 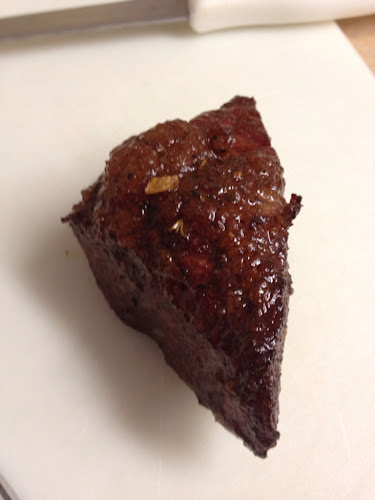 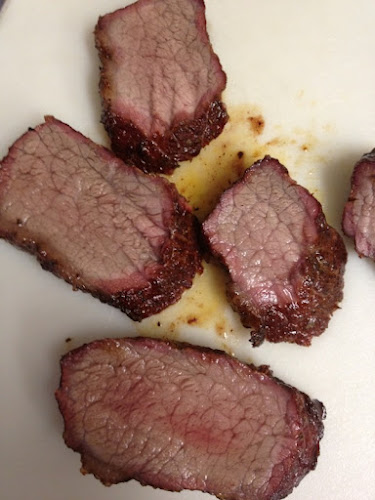 When the meat reaches 165° I remove it from the cooker and slice the point off. I take the flat and wrap it in foil with about a 1/2 cup of the mop on it and place it back on the cooker until it reaches 200° or a meat thermometer slides in easily. 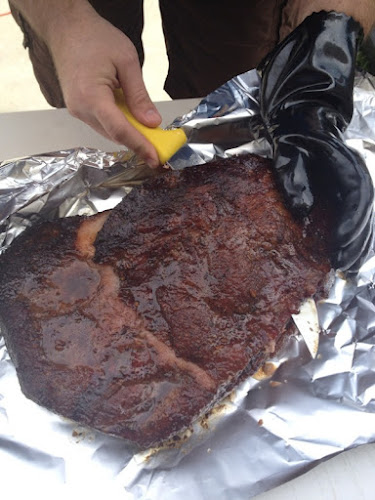 The point is used for burnt ends. These are like beef candy. After the point is sliced off the flat I rub the whole thing again and put it back on the cooker and let it cook until the brisket is done. 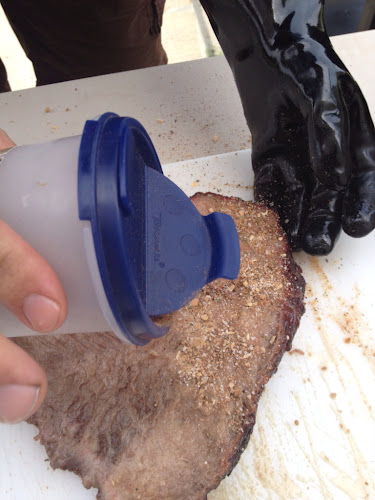 Once the brisket comes off the cooker I let it rest for at least a half hour. The resting let's the juices redistribute through the meat. Once the meat has rested I unwrap the foil, put the meat on a cutting board and save the juice that is in the foil. It is a great sauce for the brisket. I then find where I cut the little piece off earlier and start to slice the beef parallel to that corner. I slice until it is all cut up. 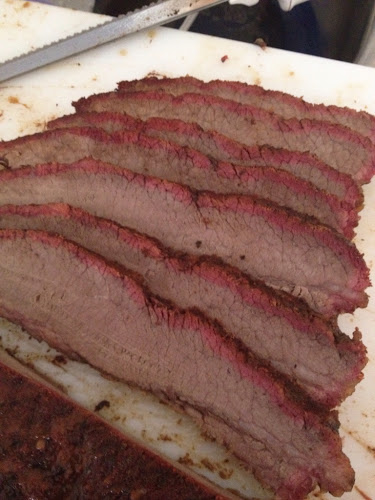 I let the burnt ends rest for a little before cutting them. I cube up the point which starts to disappear immediately as the vultures appear and start to snack. 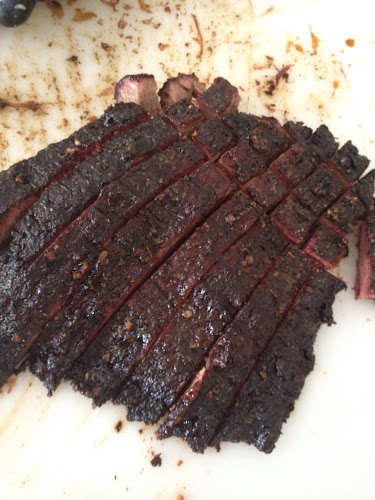 Brisket is one of our favorite BBQ meats. When done right it is moist, tender and delicious. It usually makes enough meat for a few meals. With the leftovers you can make enchiladas, chili, sandwiches or slice it up and put it on a salad. It is an awesome meal.