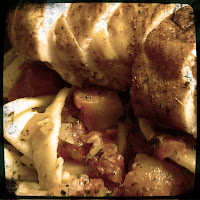 Something that I have always wanted to make is pasta. Why? I don't know I just think it would be cool to make my own pasta. So I finally took the plunge and tried it out. I made grilled chicken which I served over my pasta with a simple tomato sauce. For a first try it turned out ok.

I used a simple pasta recipe consisting of, 2 cups of flour, 3 eggs, 1tbls olive oil, a pinch of salt and 1 tsp of garlic powder. Mixing the dough was simple but the next parts took some doing. I don't have a pasta maker. I hand rolled the dough and cut it with a pizza slicer.

A pasta maker would make rolling the dough out so much easier and I could make it thinner, like it should be. Once I rolled the dough out I folded it loosely, so it wouldn't stick together, and cut it with a pizza slicer. This was much easier then leaving it flat and trying to cut it.

To dry it I hung it on some plastic hangers we had. My wife thought it was pretty hilarious to walk into the kitchen and see pasta hanging there on a hanger. Once it dried I cooked it up in some boiling water and added it to my sauce.
The sauce is a simple recipe I make. 1 onion, 2 tbls dried basil, and 4 cloves of crushed garlic sautéed in a pan with olive oil. Once the onions turn clear I add 1 can of diced tomatoes. and let it heat through all the way. I then toss the pasta with it. A little parmesan cheese and red pepper flakes on it is great.

For the chicken I just grilled it. I put some rub on it and let it sit for about 30 minutes while the grill was heating up. The chicken breasts were large so they took about 30 minutes to cook all the way through.
When they were done I let them rest while I put the pasta and sauce together. I then sliced the chicken and added it to top of the pasta. It was good.

A couple things I learned:
• A pasta maker would be very beneficial
• Hangers work well to dry pasta
• I need to perfect my pasta making abilities so I can make BBQ ravioli
Posted by sgibbsdesign at 4:38 PM