Charlotte has a bad rap for BBQ joints. It's located in the center of the Carolina's, so you'd think they would have some great BBQ places. Well, over the last 10 years that has started to change. and it is AWESOME!

Recently my wife and I went to Midwood Smokehouse to try their BBQ. My friend Wayne of Big Wayner recommended it awhile back, but they had one location that I was rarely near it. In the past year they have opened up two other locations and one was much closer to me. I finally had a chance to get over there and try it. I was not disappointed. 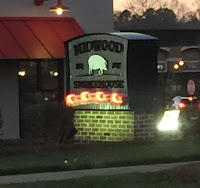 When you walk you are met with the smell of BBQ. Every good BBQ joint should have that smell. If it's missing I worry. Midwood has pig and BBQ knick-knacks peppered around the restaurant along with TV's and beer ads. It's a comfortable and laid back setting perfect for eating low and slow cooked food.

Our waiter (I can't remember his name) was excellent. He was happy to tell us about the cooking process, recommend favorite dishes and even beer to go with our swine. When I eat at a BBQ place I love for the waiter to be able to tell me about the process they cooked the meat with; the wood, the cooker; how long and some of the spices. It shows that the workers take pride in their job and that the owner cares enough to train them correctly.

Food
Both my wife and I love brisket so she had to order the brisket and I ordered the "Well-Fed" which is four meats. I had the choice between "Carolina Chopped Pork, Beef Brisket, Saint Louis Style Pork Ribs, Chopped Chicken BBQ or Hickory Smoked Sausage." I didn't get the sausage.

The food came out quickly and looked great.
The hushpuppies are some of the best I've had a BBQ place. They had a slight sweetness to them but not too much. they were well balanced between sweet and savory. The chopped pork was cooked perfectly. It had a nice pork flavor with hints of the hickory smoke. They do put a little vinegar sauce on it to keep it moist while it rests but it doesn't overpower the meat and you can use any of their three sauces to enhance the flavor if you desire. It doesn't need enhancing.

I ordered the ribs dry so I could try them with their various sauces and I don't think I added any sauce to them. They were smoky and flavorful and had a great spice on them to bring out their flavor. The bite was a perfect watermelon bite.

The chicken was pulled and mixed with just a bit of Midwood's SC style mustard sauce. It didn't overpower the flavors at all. Thier chicken was moist and smoky and just plain good.

Both my wife and I loved the brisket. It was beefy, tender and smoky. It had a beautiful smoke ring and the pull on it was perfect. It was one of the best pieces of brisket I have had at a restaraunt. It wasn't sauced, just served naked the way God intended.

After this feast we were full but had to try the homemade (Is it homemade if it's made in the restaurant?) banana pudding.  It was worth it. The pudding was thick, rich and delicious. I wasn't a fan of banana pudding until a friend of mine brought some homemade pudding to a party. Making it all from scratch makes all the difference.
Midwood Smokehouse also carries a good selection of local craft brews and uses some of them in their sauces. They also do events where they pair local pork, wines and beers to showcase local vineyards, breweries and farms.

Final Thoughts
GO! No seriously, if you're a BBQ fan your tastebuds will thank you. I plan to visit Midwood Smokehouse again and enjoy some of their other items like the bacon wrapped jalapenos, which come highly recommended. On the Gibbs Ribs* scale Midwood Smokehouse gets a full rack with a side of sauce. Yes, I enjoyed it that much. It is a great addition to the BBQ scene and Charlotte and to the institution of NC BBQ. 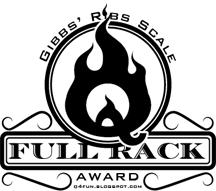 Posted by sgibbsdesign at 3:06 PM