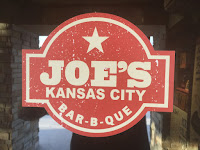 My first night I arrived in KC around six. I got to my hotel and found the closest BBQ joint was Joe's. It was in walking distance and after my flight it felt good to stretch my legs. As I walked up to the building I could smell the BBQ. This is always a good sign. It means they are cooking it there - or they have a unique air freshener. I went to the counter and looked at what they had to offer. I really wanted some burnt ends but they were out. So I ordered that day's special: brisket and ribs. After all ribs are my favorite. My sides were dirty rice and slaw.


Both the ribs and brisket were good. They weren't the best I've ever had but they were good. The ribs were close to being perfectly cooked, which can be hard to do in a restaurant due to having to keep them warm. They were close to being over cooked but we're still good. I tried their three sauces which weren't bad but tasted like they had liquid smoke in them, which I find off putting. Over all it was good food but it was my least favorite of the four BBQ joints I tried. 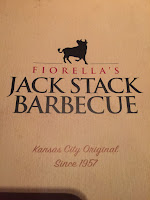 The second was Fiorella Jack stacks. This was a different sort of BBQ joint. It was much higher end but still good. The restaurant wasn't your typical BBQ joint. You are seated by a hostess and the ambiance is like a high end steak house. The food is on point and is very good.

Here I was able to get burnt ends as an appetizer. They were good and full of beefy flavor but not as good as I was hoping. For my dinner I had beef ribs and brisket. Both were awesome. The brisket was cooked perfectly. It was tender and fell apart as did the beef rib. The restaurant was very nice and I would rank it second in my KC BBQ experience so far. 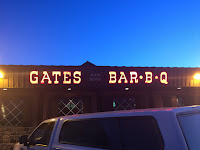 The third place I ate at was Gates and sons Bar-b-Que. I was able to enjoy Gates with a friend I grew up with and his son. This one felt like a true BBQ joint. When you walked in you could smell the BBQ cooking. The aroma of wood smoke and meat cooking hit you as you walked In the door and you were greeted by the workers. I ordered a beef and pork sandwich. It was divine. The pork was smoked and sliced perfectly as was the beef. The sauce they had complemented the meat and didn't have the taste of liquid smoke in it. I would rank Gates as my top BBQ place in KC from my visit. 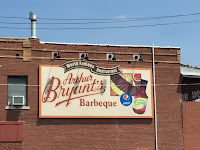 The final stop on my Q tour was world famous Author Bryant's. This is a small hole-in-the-wall out of the way place that is packed. They have a line out the door. Again I was greeted by the smell of wood smoke and cooking meat. It was a struggle to wait in line with the smell of food wafting through the air. I ordered the burnt ends sandwich and ribs here. The burnt ends, while cooked well, had too much sauce for my liking. The ribs were good, well cooked and well seasoned. Author Bryant's would rank third on my tour.

So my rankings after this trip are:
1. Gates
2. Fiorella Jack Stacks
3. Author Bryant's
4. Oklahoma Joes

While it was a quick trip and these are my first impressions of each place I would eat at any of them again and have no problem paying for the BBQ. Jack Stacks and Bryant's are really tied for second but I put them in the order I did because Jack Stacks was not as stressful to me. Each has its own charm and ambiance while serving healthy portions of food. The biggest difference I noticed between KC BBQ restaurants and Carolina BBQ restaurants is in KC most of the meat is sliced while in the Carolina's it is pulled or chopped. In KC it usually comes with sauces on it while in the Carolina's it is unsauced so you can add your own.

I hope to go back and try some new items from the menus and try BBQ from other parts of the US (Texas, I'm looking at you).
Posted by sgibbsdesign at 9:56 AM