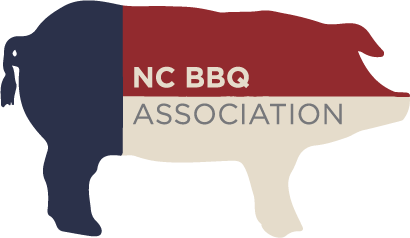 Last year at the Q-City Charlotte BBQ Festival I started to hear rumors of a new BBQ sanctioning committee being born. It was started by a group of competitors, caterers and restauranteurs that is interested in preserving the art of NC BBQ. They came together to form competitions that highlight the best of NC BBQ by focusing on the meat.

In August of 2014 I became a NC BBQ Association member and certified judge. The class wasn't difficult - you get to taste BBQ - and since I am a certified KCBS judge, it helped me understand what is being looked for. The style of judging follows closer to MBN style with a combination of both blind and onsite judging. I like the combination of the two because it gives you a chance to learn from the teams and how they create their particular BBQ magic.

The focus of the competition is on three types of meat; whole shoulder, whole hog and whole chicken. The meat is to be served with no extras - no garnish, not sauced and no other ways to identify an individual teams meat. The teams can put sauce in containers to go with the meat but the meat should stand on its own when tasted. The judges are asked to taste the meat with and with out sauce, if sauce is provided, when blind judging the meat.
The onsite judging follows the MBN format where the judges go a team site to talk to and hear about the cooking process and how the pitmasters work their magic. The big difference, if I recall correctly, is three judges will go to the site at the same time. Which helps to speed things up and isn't reserved for the final rounds.
I look forward to being part of this association and seeing how it grows and changes in the years to come as the Association adapts and grows.
I talked to one of the board members, Justin, to find out more about the association.

When did the NC BBQ Association start?
NCBBQA formally began in late 2013. However, some of the “founders” had been talking about a NC-based competition organization for a few years prior to that.

What is the idea behind it as there are so many BBQ groups out there?
Our idea was to create an organization that recognizes the uniqueness of NC BBQ and foster/promote traditional cooking methods. Our competition meats are whole hog, whole shoulder, and whole chicken…the traditional staples of NC BBQ.
What makes you different than the other associations, societies and networks?
We train our judges to recognize and appreciate NC-style BBQ. Teams will be judged on their ability to produce traditional NC-style BBQ. I don’t think other sanctioning bodies concentrate on regional BBQ styles. Furthermore, we not only sanction competitions, but hold cooking classing and are beginning to work on projects that will promote NC BBQ to the general public. We don’t see the other bodies as competitors. We see them as partners and can hopefully jointly sanction some events as with this year’s comp in Washington with the NC Pork Council.

How many sanctioned events are you hosting this year? Next year?
This year –

Next year –
Hopefully these same ones plus a few more including one in Monroe in May and maybe a stand alone whole hog competitions.

When are the next judging classes?
Our latest one was
September 28, 2014
Meat 'n Great/Judges Training
Fayetteville

Keep your eye's and ears open to find out when they will happen again. You can check out the NC BBQ Association here: http://northcarolinabbqassociation.com/
Or check them out on Facebook here: https://www.facebook.com/NorthCarolinaBbqAssociation

Posted by sgibbsdesign at 12:27 PM