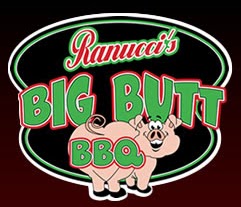 Each month I’m going to try to do a short interview with various BBQ teams, aficionados and purveyors of BBQ equipment. I’ll be looking for some small insights from the teams about their cooking, how they started and maybe get some cooking tips. If you have a team you would like me to interview, shoot me an email and I’ll see if they will be willing to do it.

To kick off the interviews, I asked Ranucci’s Big Butt BBQ be my first interview.

I met them a few years ago cooking at a competition in Shelby, NC when I was competing. I have watched them as they have started to win more and more in the area. Alex and his dad run a great rig and do a great job with help from the rest of his family.

Most recently they won Grand Champion for the Charlotte Q-City BBQ Championship, taking first in ribs and shoulder and second in whole hog.

Q4Fun: With a name like Ranucci, how did you get started doing BBQ? It sounds more like an Italian restaurant than a BBQ name.
Alex Ranucci: I got started in making BBQ when I went to school at Gardner-Webb (Shelby, NC). I learned very quickly that BBQ in the south did not mean firing up the propane for some hamburgers and hot dogs. It was a two day event. After I was exposed to what true southern BBQ was about I started to teach myself how to make dry rubs and then sauces. Yes, I even started out boiling my ribs (Oh the horror! - Q4Fun) then grilling them until I bought a small offset smoker from Lowes. What a difference of flavor that was when we smoked the ribs the whole time.

Q4F: How many competitions a year do you compete in? What’s the furthest you've travelled for one?
AR: We only compete in 4-5 contests per year. The farthest we have traveled was up to New Hampshire for an MBN event. It was worth the trip and made all 3 finals.

Q4F: What is you’re favorite style of competition? KCBS, MB, other? Why?
AR: We really like to do the MBN events now. We started out doing KCBS when we first began competing, but now we do mostly MBN events after we were introduced to them here in Charlotte back in 2005.

We really like the on-site judging and explaining how we cook our bbq and what sets it apart from some of the others.

Q4F: Do you have any advice for those wanting to start competing in BBQ?
AR: Keep it simple. I see a lot of new guys going out and trying to over think their rubs and sauces. We haven't changed our rubs or sauces over the past 6 years. Also, competition is a lot different than doing it in your backyard. You don't have an extra 2 hours to get things done at a competition. Comps are not only about good flavor but it's also about timing things perfectly.

Q4F: Can you give one piece of advice for those who want to cook bbq?
AR: For anyone who wants to start out cooking BBQ I would say start out simple then start to add new things to add layers of flavor. One thing should not overpower the next. BBQ should not be too spicy, nor to sweet, and it should have a nice hint of smoker flavor. The wood should be like a spice and not overdone. I talk to a lot of new guys at competitions and the one advice I give to most of them is cut back the wood they are using. Most of the time a few chunks is better than the whole tree.

Q4F: What is your favorite meat to cook? What is your favorite to eat?
AR: We really like to cook whole hog. It's the hardest thing to cook especially at a competition but when you get it right there's nothing else like it. Trying to get all the different sections done at the same time correctly is a challenge. 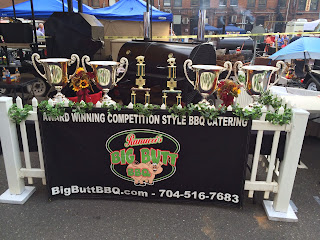 Q4F: I know you used to have a BBQ restaurant in Belmont, NC but you are now out of that. Do you still cater? If so how can people contact you for catering?
AR: We sold the restaurant back in April and are now focusing on catering and competitions.
They can go to our website www.ranuccis.com and email me at alex@ranuccis.com.

Q4F: Being that we're in November do you have any advice on smoking turkeys?
AR: Let the experts do it! The one thing to do to make sure a turkey turns out nice and juicy is to make a good brine. Not only will it give the bird lots of flavor but it will help with retaining the moisture as well.

Q4F: And one last random question. What is the strangest thing you have ever cooked on a smoker?
AR: We were asked a few weeks ago to cook a whole goat with the head on for a tv series being shot here in Charlotte. Nobody ate it but it was a nice looking prop.

Thanks again to Ranucci’s Big Butt BBQ for taking the time to answer some questions. If you’re in the Charlotte area and need a caterer give them a call, they produce some great food. Good luck to Ranucci’s in the next years of competition. 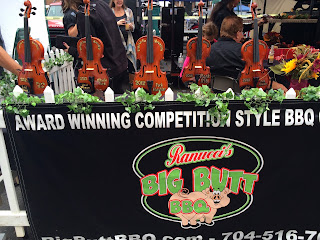 Posted by sgibbsdesign at 9:26 AM