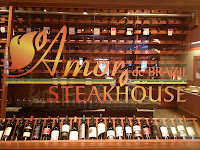 There's a taste of Brazil hidden in Matthews, NC. The service is friendly, the ambience intimate and the food plentiful. It's a great place to celebrate a birthday, anniversary or just hangout with a bunch of friends. But go hungry.

The first thing you notice when you enter is the decor. Dark woods, leather chairs and low lighting give Amor de Brazil an intimate, warm aura. It has a masculine feel to it that you would expect from a steakhouse.

The waitstaff is friendly and helpful. They explain the menu, the foods and the service. This is a brazilian steakhouse where the gauchos walk around with meat on large skewers and slice off a piece for your enjoyment. You have a little disk beside your place that is red and green. When you are ready for meat you place the disk green side up and a gaucho appears with a skewer of meat and cuts a piece off. When you are done you flip the disk to the red side.

Each dinner comes with a fried banana coated with cinnamon and little cheese rolls. The bananas were ok. The cheese rolls rock. They are like little popovers with cheese on them.
The salad and cheese bar here is great. I'm a cheese fiend and they have a great assortment. From Asiago to cheddar to some that is soaked in wine. They also have various olives to go with the cheese. I was in heaven.
The salad bar has various salads and seafood. Boiled shrimp, Brazilian chicken salad, capressi salad and and others. The salad bar is wonderful. The salads and food on it are fresh and tasty. The salad bar is a decoy to take your mind off the meat though. It's there to fill you up, so save room for the main course.
Behind the salad bar is a wine room with a nice selection of wines to compliment your meal. They carry a variety of wines from South America and other regions.

When we were ready to savor the succulent cuts of roast beast, the waiters brought us clean plates. A gaucho soon appeared with sausage, chicken, tri-tip, top sirloin, bottom round, fillet, bacon wrapped chicken, lamb chops and others. It was a feast. The Brazilian sausage was a bit salty for our tastes as were a couple of the other meats but on the whole they were well cooked and flavored. The tri-tip was cooked perfectly medium-rare as were most of the beefs. The chicken had a great sweet and savory flavor playing off of each other. The lamb chop was probably the best I've ever eaten. I really enjoyed the flavor of it. The meat is roasted on spits over a fire until it is ready. When it's ready, it's served.
Surprisingly we saved room for dessert. My wife tried the papaya cream and I had the Brazilian flan. The flan was light and creamy with a carmel toping that set it off perfectly. The papaya cream was a wonderful combination of vanilla ice cream, papaya, and a little liquor served in a martini glass. A little cinnamon was served on the side and when added to the dessert, rounded it out perfectly. Both were a great end to a great meal.
My wife and I wished they had a card with pictures of each meat on it. This would allow us to see what they had and know what was being presented. The gauchos did a great job of telling us what it was and how it was prepared, but sometimes it was hard to hear. A little chart on the table of the meats being served would also have allowed us to signal the gaucho that we wanted a particular one they were carrying.

Amor de Brazil is a great restaurant with an awesome wait staff and scrumptious food. My wife and I both enjoyed this restaurant and it give it a full rack of ribs on the Gibbs Ribs Scale*. It is a place I plan to visit again with friends and family. It is an experience that needs to be shared and enjoyed with others.

Posted by sgibbsdesign at 11:00 AM