Catering for my Cousin 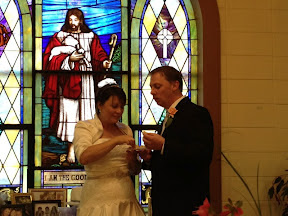 About two months ago my cousin contacted me and asked if I would cook BBQ and baked beans for her wedding. I agreed. She said she would have 100 guests so that's what I planned for. Thankfully there are a couple spread sheets out there that can help calculate how much BBQ will be needed for an event depending on the size of the crowd. I also have the benefit of asking those who cater often, through the BBQ Brethren Forum, about the amount of food needed.

About three weeks before the cook I started to make sauce. I made four Masonite jars of my tomato based sauced, four jars of my mustard based sauce and a gallon of my vinegar sauce. I also mixed up a 10 cup batch of rub. Two days before the wedding one of the mustard sauces slipped out of my hand and shattered on the floor. We had a moment of silence for the loss.

The week of the cook I went to Restaurant Depot and picked up 8 pork butts, steaming trays and four large cans of baked beans. The plan was to cook the butts the day before and store them broken down in the fridge in gallon ziplocks, then reheat the meat and cook the beans on site in crock pots.


The night before the cook my girls helped me prepare the butts. I made some honey mustard with my rub in it to paint on the pork. After painting the whole butt I shake my rub all over it, foil the pan and put it in the fridge over night.


I planned to use my new pellet cooker for this cook. This was the first time I have done this much meat on it. I got the cooker set up and going. Once it reached temperature I put the butts on. With the wind and amount of meat I had on the cooker it was having a hard time maintaining temperature (I think I may need to double check the cookers temp probe too).


I didn't think about the amount of fat on all the butts and it draining or not draining and about half way through the cook went out to see the cooker billowing smoke. The fat and grease form the pork and caused a huge flare up. I was able to get it out quickly and started one of my other cookers and moved four of the butts to it.

I was worried I was going to have burnt offerings to offer to my cousin. Thankfully the rest of the cook was uneventful. It took about two hours to pull all eight of the butts with only one being a little bit tough.

The next day I loaded all the pork into my large cooler with the sauces, beans and ingredients to make the beans. We arrived at the church, where the reception was, at 1:30 and we put the meat into crockpots to reheat (this is the ONLY time BBQ should come from a crockpot). I made sure to leave some of the fat on the meat as that helps keep it moist when reheating.


I used the two largest crockpots for the baked beans and mixed them up. Everything was ready to serve by 4:00 pm. Service went well with only some minor hiccups caused by the sauce bottles not wanting to give up the sauce.

I received many complements on my pork. It is nice to hear that from others outside of immediate family. I had a couple people tell me it was the best BBQ they have ever had and others say it was better then some of the local BBQ places that have been around for years.

Overall it was a good cook and went well. We had two gallon bags of BBQ left over and about a half crockpot of beans. It's always better to have too much.

A couple things I learned:
1. Trim the butts down some to help avoid flare ups
2. Clean the temperature props on the pellet cooker
3. Trust your skills when you have been smoking things for a while
4. Have fun
Posted by sgibbsdesign at 9:06 AM