This year the team I compete with has taken a break from BBQ competitions so I have decided to judge a few that are close by. BBQ & Blues is an annual event in Charlotte, NC that I have competed in. This year I judged. I am a certified KCBS BBQ judge but have been interested in the MBN style and thought this would be a good way to find out about it. I sent in my judging application and was selected to help judge the backyard category of pork. I lucked out and got to judge ribs too.

My family had dentist appointments on Friday, so we thought we would go by the competition to see where it was and see what all was there. We walked around and I talked to various teams. It's a bit different not competing and seeing your competitors. Some have new cookers, new rigs and new trophies. Others never change.

We also got to check out the backyard cookers and sampled some of their anything-but entries. An anything-but is something other then BBQ. It could be wings, dessert, wrack of lamb or salmon. Usually it is made on site and cooked in a cooker. We got to try some wings and they were good.

Saturday my family dropped me off at the train station, which I took up to Charlotte. On the way a girl who was visiting from South Korea started to ask me questions about Charlotte and what I was heading there for. I told her about the competition and she decided to tag along and check it out. She had never heard or seen anything like it. I showed her around the festival and told her about how the meat is cooked and what the judges look for. One of the teams was kind enough to give her a sample of their ribs. She loved them. I had to head in to judge so we said good-bye and she toured the rest of the festival.

The judging for MBN is similar but different from KCBS style. In KCBS both professional and backyard categories are judged at the same time by two different groups of judges. It's quick and efficient and the meat is turned in within a 10 minute window so it is still hot. As soon as the coordinators have six boxes they are delivered to a table and the judging starts. 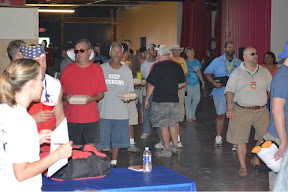 In MBN style (for backyard) the contestants line up and wait for the coordinators to start to collect the boxes. They have a turn in time and that is when the judges start to collect the meat. Each box is marked with a table number and a box number 1-6 to identify it. The coordinators write down the teams and the unique number. Once all the meat is set on the tables the judges are seated and the boxes opened to judge.

Both styles use three categories; appearance, taste and tenderness. MBN adds an overall score area where you give the meat a rating from 10 down.

I was able to judge both the ribs and the pork. Last time I judged backyard the rib entries were not good and the chicken all tasted like lighter fluid, so my expectations were not high. I was pleasantly surprised by the entries. All of them were good. In the ribs category there were a couple that had great flavor and tenderness and really stood out. One entry was really tough but had good flavor. Only one of them looked good, had good tenderness but the flavor profile was not to my liking. In the pork entries I judged, one of them I scored all 10s. It looked good, was tender and I just wanted to keep eating it. It had the right combination of sweet porkiness and salty bark. One entry tasted like it had been injected with bad juice of some kind. It had a sour, bad fruit taste which was unfortunate because it looked delicious and was perfectly cooked.

After judging I was able to walk around the competition some more and talk to some of the professional teams that had cooked whole hogs. I was even able to get some samples, and they were GOOD. Someday I will cook a whole hog. 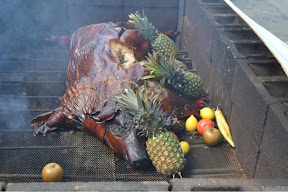 Saturday was a lot of fun. Eating good BBQ. Talking BBQ with old friends, teaching new friends the finer points of BBQ and learning of some new places I want to check out and write reviews on.
Posted by sgibbsdesign at 11:05 PM