This weekend I smoked some pork and a brisket. It was the first time I smoked a brisket so I had a bit of fear going into it. I really didn't want to ruin it. The other obstacle I ran into was snow. When it snows it is harder to keep the smoker at the right temperature so the meat may cook quicker (due to high temperature) or longer (due to low temperatures). Well, turned out I had a flat not a whole brisket so it only took about 5 hours to cook it as opposed to 10+.

Another thing I did was video my process. I won an iPod Nano form Dealsplus on twitter and decided to give it a go. the video didn't turn out too bad and neither did the Q. Here is the video:
The snow Q turned to a swamp Q by the end of the day as everything melted. 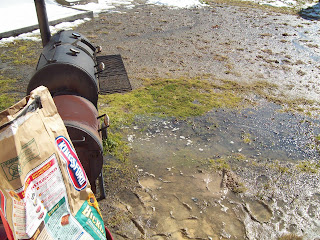 Below is the final brisket cut up (ok the part that made it the container, the rest was eaten quickly). 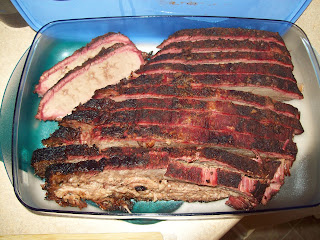 And here are the two butts before I pulled them. I didn't take any photos of the pulled pork though. 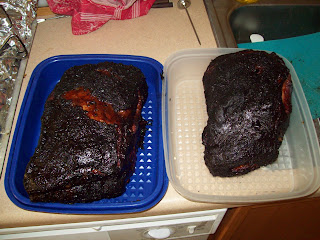 Posted by sgibbsdesign at 7:46 PM